ONCE SEEN, THEN GONE Zachary Mann

One Off Cryptids
In television the phrase for a character that comes into an episode and either dies or completes whatever role they need to (plot wise or character wise) and then disappears never to be seen or heard from again is called a one off character. Most of the time they are easily forgettable to the overall story. So what does this have to do with Cryptozoology I hear you ask? Well over the years certain Cryptids have become to put in a way that many Americans might better understand “Superstars.” The two undisputed kings of the Cryptid world are Bigfoot and the Loch Ness Monster. More time, money, theory and effort has been put into trying to examine these creatures by both believers and skeptics than pretty much all other Cryptids combined. Below them are Cryptids like the Jersey Devil, Mothman, and the Chupacabra. These guys get plenty of focus from the main stream and pop culture, but nowhere as much as Bigfoot and old Nessie.
Below them are Cryptids like Cadborosaurus and Mokele-Mbembe. These guys have certainly had a lot of time put into investigating them by some people and they do get talked about outside the Cryptozoology community at times, but never to the degree of something like the Jersey Devil and definitely not to the degree of Bigfoot. And as you go down the list of various Cryptids less and less people, even within the Cryptozoological world, will know about them. Sure some know or have an interest in these more than others, but you get my point. I have been interested in and researching Cryptids for years and I still hear about ones I’ve never heard of all the time. And I have read books and articles by men who have been at this longer than I have been alive and they even still find new Cryptids they have never heard of. It’s one of the many reasons I love this field so much, always something new to discuss. I personally refer to these kind of Cryptids as One Offs.

So the following is a brief look at a few of these kinds of Cryptids in the USA in modern times. This is by no means a definitive list, but some things to think about. If you (the reader) have any more information on these or other fascinating One Off Cryptids please feel free to share.
Batsquatch
On April 16, 1994, at 9:30 at night an eighteen year old student Brian Canfield was driving near Mount Rainier, Washington. Suddenly his car experienced failure causing his to stall. Then suddenly a creature descended from the sky above his car and landed in the road ahead of him. The beast was about nine feet tall with large wings. The head was wolf-like, it had sharp teeth, clawed hands and feet and bluish hair. After he had stared at it for a few minutes the creature flapped his wings and flew off into the night. Reported sightings of giant man-bats have a long history in many places of the world, but this is the only publicly known one from this part of America.

The Sherman Sloth
I have already written about it in one of my previous posts (White Things Part 2) but as I’m fascinated with the Cryptids known as White Things and this creature fits  that description. For those of you haven’t read my past post or haven’t heard of it elsewhere, here it is. In 1970, author John Keel received an anonymous letter from a fifteen year old boy form the small town of Sherman, New York. He claimed that he, his family, and two other workers on their farm had seen on a number of occasions one (sometimes two) large white creatures on his property. He described them in his letter as resembling the prehistoric Ground Sloths. No more reported sightings have come from Sherman, so it might have been a hoax, then again maybe not.
Florida Llama

I remember reading on one of the few reliable Cryptid forums (most are un-moderated and let anybody post anything on them) about a man who after Hurricane Katrina hit the US saw a strange beast. He was heading back to his home after the devastation. While driving down the highway, he noticed a familiar yet at the same time strange looking creature. He described a creature that he very clearly as a llama walking down the road. He knew (as well as most people should) that these animals are not native to Florida. But what made him do more of a double take was the size of the llama and its longer slender neck and head. He said it was almost the same size as a large Elk or Moose. Llamas can grow fairly big, but they can’t approach that size. Yet Florida was home, until 10,000 years ago, a species called the Large Headed-Llama. It was bigger than any llama alive today. So could some of these creatures have survived? In all likelihood this was just an escaped animal from a farm or zoo. The Hurricane could have destroyed its pen, causing it to get lose. After all why has no one else in Florida seen such a large kind of creature?
Giant Armadillos
Staying in Florida, a woman retold the story of how when she was fifteen (same age as the Sherman boy) she lived in a residential suburban neighborhood near Tampa Bay area surrounded by woods and orange groves. Over the course of several nights she would see two to three animals come into her yard at night and dig it up. They were probably looking for food. She was able to get a very close look at them (from just feet away through the screen door) and said they looked just like armadillos, but they were between five and six feet long. That is far larger than the native species of armadillos native to Florida. In fact that sizes rivals the largest known armadillo alive today the Giant Armadillo (Priodontes maximus). Florida was once home to a number of large armadillos, could some still be alive? Again why has no one else have reported seeing them?

Georgia Velociraptor
On July, 25, 2008 a teenage boy and his Grandpa were hunting on his Grandpa’s property in Georgia. As they walked down a road they began to hear strange noises. They stopped and listened when suddenly a strange animal walked out of the bushes about 150 yards ahead of them into the road. It sniffed the air as it came into full view. The eyewitnesses said it walked on two feet, had a long tail, sharp claws on its hands and feet. In short he described it as looking like the Velociraptors from the famous Jurassic Park film. After the creature turned it made the strange noises they heard earlier and walked back into the woods. After it disappeared they left the woods and headed for home. A few things stick out to me about this sighting. First, I’m aware of a rather long history of these kinds of sightings from the southwest (namely Arizona and New Mexico, even several from Texas) but this is the first from Georgia. Second, is that the witness says it was about five feet tall, all the others from elsewhere in the country place them at only about three feet making it (if true) the biggest one on record. Third, I find it weird that in this and all Neo-therapod reports the eyewitnesses never seem to report feathers. We know that many therapods had feathers on them, so if they do represent therapods why no feathers? 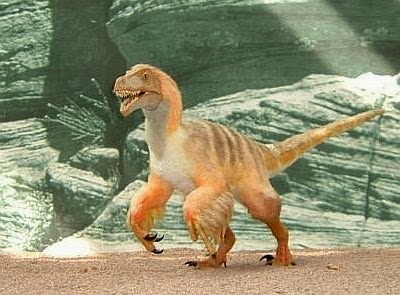 Colorado Sauropod
Staying on “dinosaurs” in America, there is a long history of seemingly dinosaur like creatures in other places on earth, e.g., the Mokele-Mbembe of central Africa, but did you know that there was one really interesting such sighting from America? Well according to a bus driver in Colorado, in the 1970s he saw a creature on his bus route that was huge and unlike anything he ever saw before. He couldn’t identify the beast until he saw a book with a picture of a Diplodocus. I have to say outside the fact that no one else has ever come forward with such a sighting I find it strange that someone would be able to recognize a dinosaur when they see one. Sure I would be shocked and dumfounded, but I would know what it was, even if I didn’t believe what I was seeing.
Louisiana Spider


In 1948 in Leesville, Louisiana, William Slaydon his wife and three grand kids where walking to church on a cool night. As they walked down Highway 171 they were stunned to see a gigantic spider come out of a ditch ahead of them, cross the road and disappear. They described it as hairy, black and, most notably, as big as a wash tub. Needless to say, they never walked that way to church at night again. This would scare anyone, arachnophobic or not.

So there you have it. A brief look at some of these One Off Cryptids. Are they real? Do they represent unknown animals? With just one report it is hard to say, but if anyone has any more information on these or any other bizarre local Cryptid be sure to share. And if you are worried about being judged, I just what to let you know that (I think I speak for everyone here at CFZ USA) that we will always listen without judgment. After all if we don’t take the time to listen we will never begin to start to find the truth. And at the end of the day the truth, Cryptid or no Cryptid, is the ultimate goal of Cryptozoology.

Editor's note:  The so-called velociraptors in Jurassic Park were not actually velociraptors.  They were another type of dinosaur - deinonychus.
Posted by Ego Ronanus at 08:15