1946: Texarkana's "Phantom Killer"—subject of the film The Town That Dreaded Sundown—stages his first lover's lane attack. Victims Jimmy Hollis and Mary Jeanne Larey survive, unlike others in the series of still-unsolved shootings.

2014: Some experts on Norse mythology peg today as the start of Ragnarök, ("Twilight of the Gods"), including a cosmic battle claiming the lives of gods Odin, Thor, Týr, Freyr, Heimdallr, and Loki, followed by various natural disasters ending with the Earth submerged in water, awaiting repopulation by two human survivors. With any luck, they won't be Rush Limbaugh and Ann Coulter. 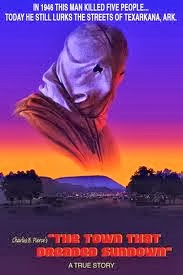