2012: Bigfoot blogger Robert Lindsay reports the "first DNA-proven photo of Bigfoot ever revealed," allegedly obtained in summer 2009, when the creature approached and licked a wildlife camera in the Olympic Mountains of western Washington State. The photo offered in evidence as proof is blurred beyond recognition (at least for me), then enhanced with an unnamed artist's rendering of the presumed face. For a look at the "proof" see https://robertlindsay.wordpress.com/2012/01/25/bigfoot-news-january-25-2012/ 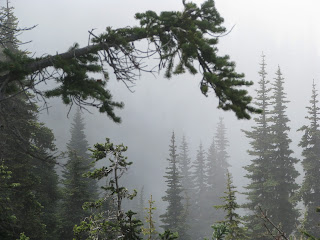 The Olympic Mountains
Posted by Mike Newton at 00:19