If you venture into the state of Vermont, your footsteps may take you to Lake Bomoseen in Rutland County.  There you will find Rabbit Island, which is tenanted by rabbits of considerable size. There have been reports of similar sized rabbits elsewhere in the county.  These giant rabbits are often treated as cryptids, but are they really? Giant rabbits have also been reported from Minnesota and Florida, while similar creatures have been reported from Britain and Australia.

However, in thinking they are cryptids, we may be jumping the gun.  Giant rabbits are well known among breeders, the most famous being perhaps the Flemish Giants.  If somebody left a single giant rabbit in a gravid state on Rabbit Island, it could easily have become the progenetrix of a whole population.

Giant rabbits tend to live for about four years and are said to make good household pets.  However, I can imagine one being abandoned when it was discovered she ate a great deal and I will not venture into the question of defecation.  (I have not discovered if it is possible to housetrain them).

Escapee Giant Rabbits may account for the sightings.  There is, however, something slightly spooky about those on Rabbit Island. They are said to have glowing red eyes.  It is possible, however, that this feature is only a piece of additional folklore. 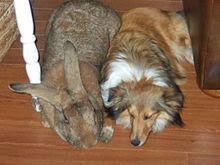 Here we have a Dog and Giant Rabbit who seem to be on the best of terms.