Lake Vättern is in Sweden.  A humped monster has been reported in the lake from time to time.  In 1947 there was a report of three of these animals on the same occasion.  There were also sightings of the single hump variety in 2001 and 2007. 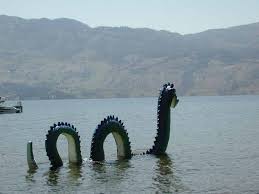 Another creature was reported from the lake in times agone.  This was a humanoid,  It was bipedal and covered with what were described as scales.  It was able to walk on the water.  Its ugliness was a matter of comment.  However, this rather chilling beast has not been seen since 1897.